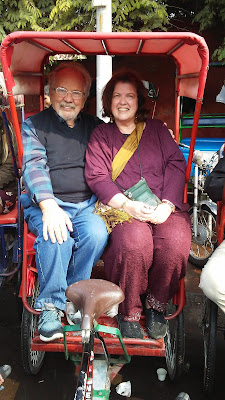 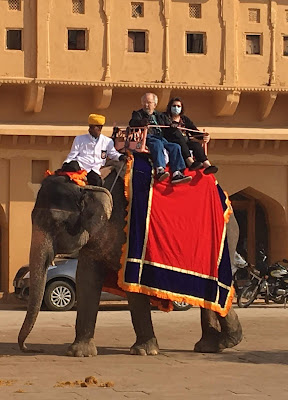 What can you say (after just a few weeks) about a big complicated, mysterious, ancient, dynamic country that is India. I guess you have to be a big complicated, mysterious, old and not too tired person to tackle this task. I may not have all those requisites, but I am going to have a stab at a very few things I noticed. And my husband Darwin and I did manage an elephant ride and a crazy rickshaw ride through old Delhi which reminded us that we are ancient.

Our first days were completely occupied with Great Big Indian Wedding: Cultural event that ends my year!. We then toured the golden triangle of Jaipur, Agra and New Delhi with a hearty group of mixed aged fellows mostly from San Diego and all part of the wedding party.  Our limited view did not take in the Hindu south, the scenic east or even the borders to the north. We passed through mainly flat land with scubby fields, some interest brick making structures and a large number of sacred cattle. The air this time of year was full of fog, not cold but smog filled, which lent a picturesque mystery to the landscape as trees and buildings faded in and out of view.


We saw the Taj Mahal just before sunset and it almost blended into the skyscape at that time of late afternoon.

Our tour guides concentrated on Muslim mosques, tombs and monuments which were preserved and restored from the 17th century. Those are the tourist attraction of this area. Muslims, as you know, don’t believe in depictions of sentient beings so they eradicated so much of what was here before. The early column and lintel entrances, plain arched entrances are mainly replaced by the more decorative arches. This produced a great variety of intricate designs.

* Please note:  we took two days off sick and the guide changed the order of some of our visits so the names might be a bit confused. I have done my best to identify cities and monuments.


We arrived by elephant up a steep 20 minute trail to the Amber Fort. I wish I could tell you I had video of this trip, but it was all I could do to hold on to my seat! 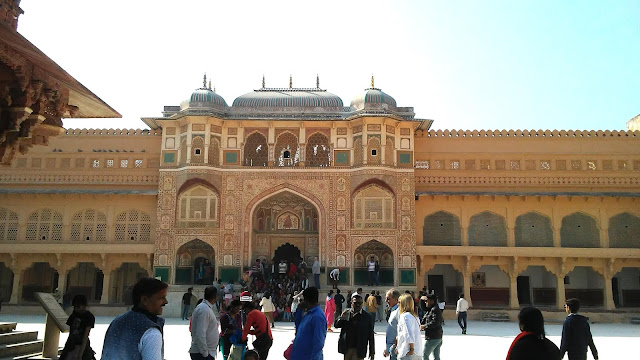 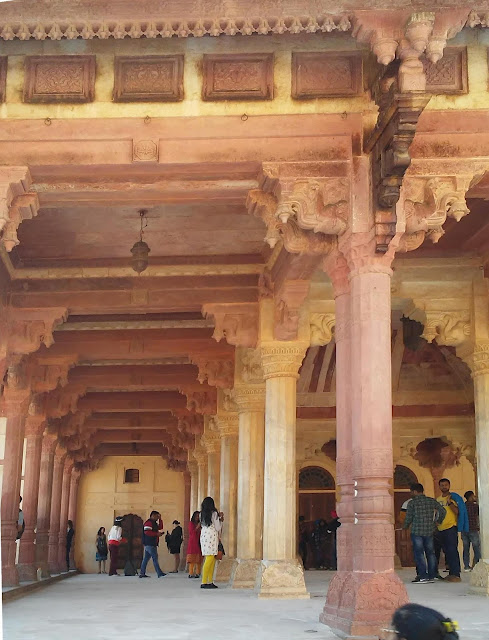 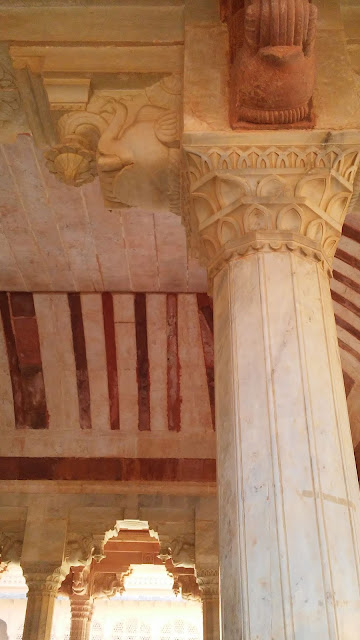 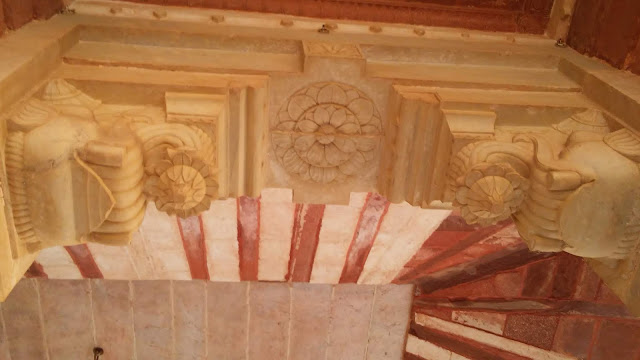 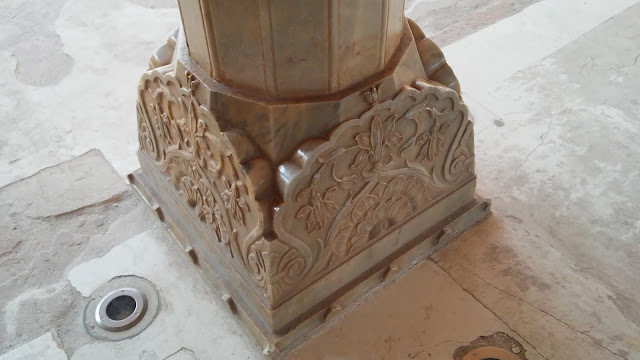 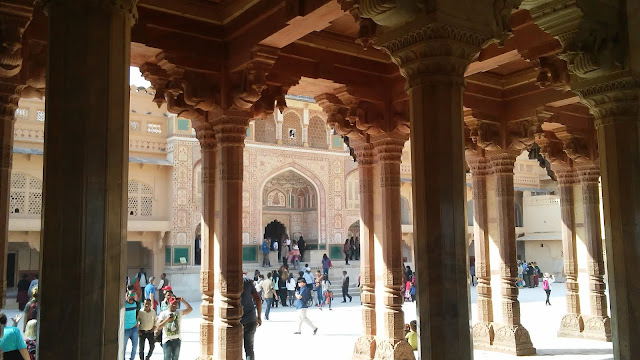 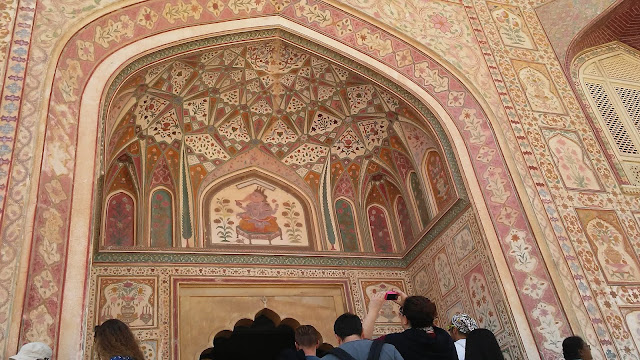 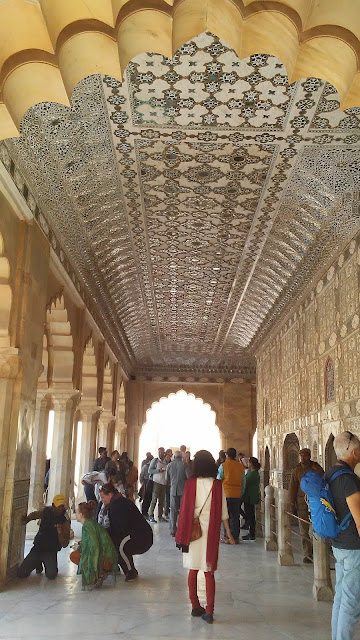 Agra and the Taj Mahal 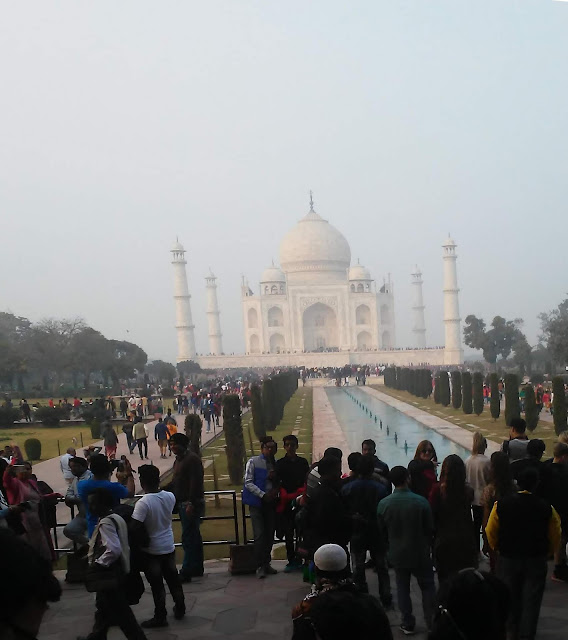 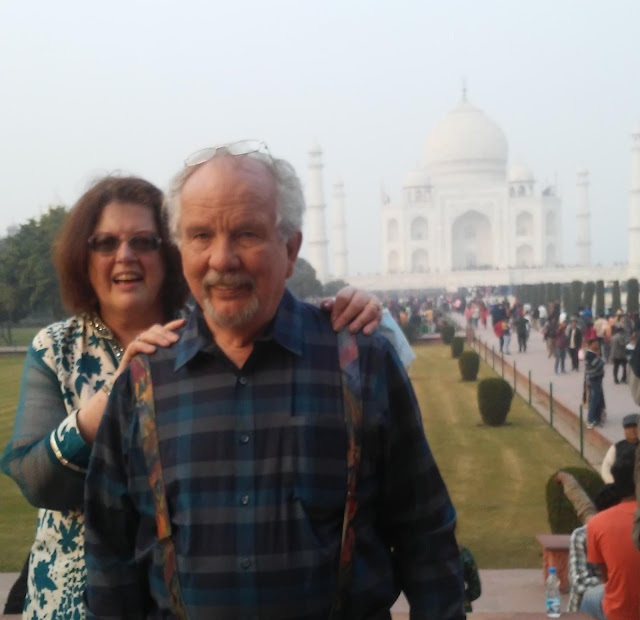 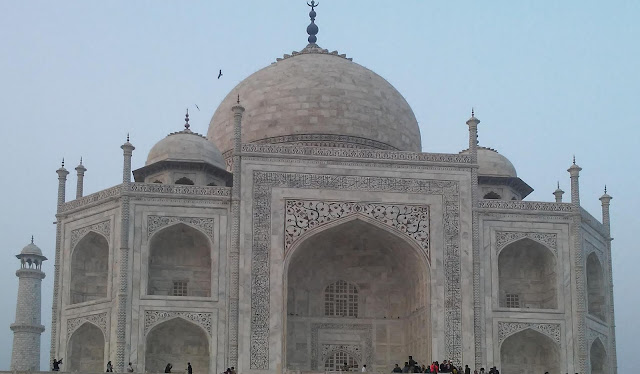 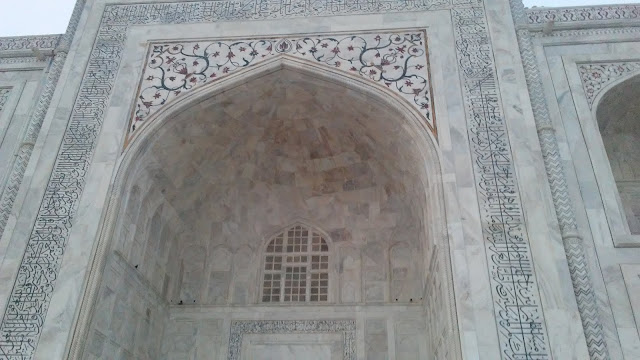 We visited the Jama Masjid, the largest mosque in India but you had to pay to take photos and I was pretty exhausted by that time. But we did observe Mahatma Gandhi memorial at Rajhat which was simple and moving, before going on to the Hamayun's Tomb 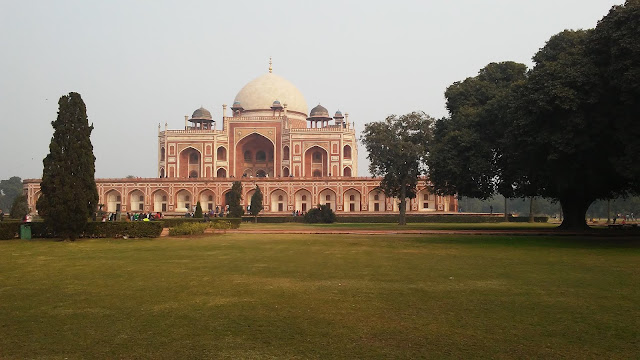 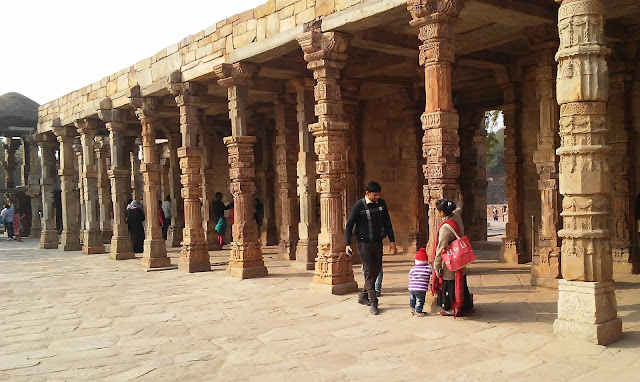 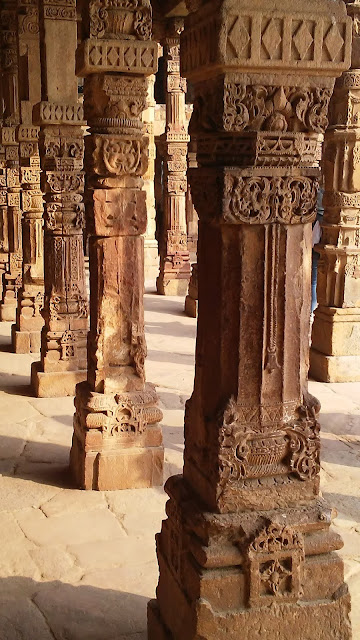 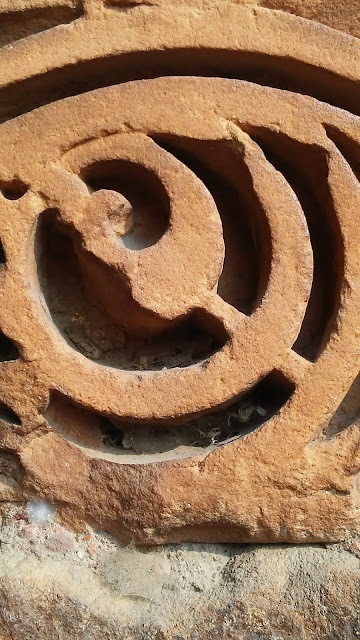 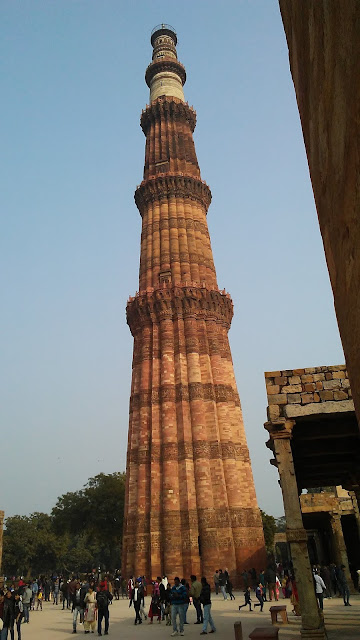 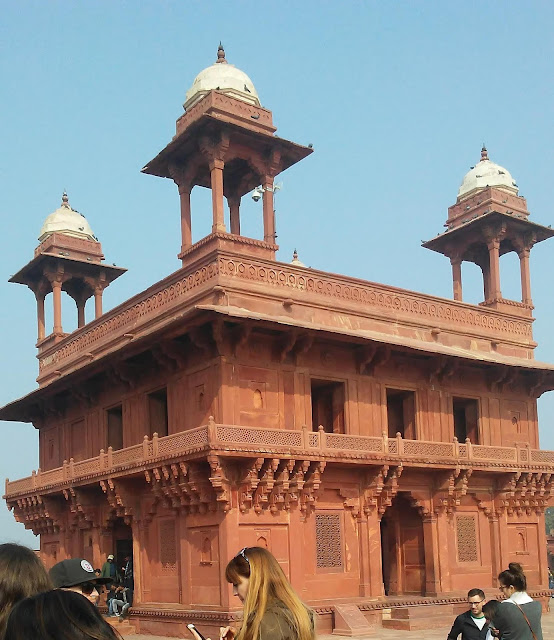 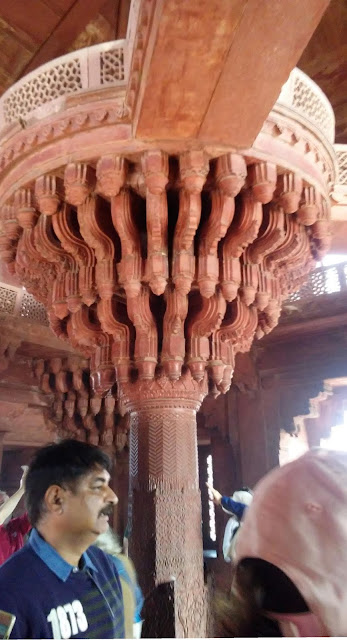 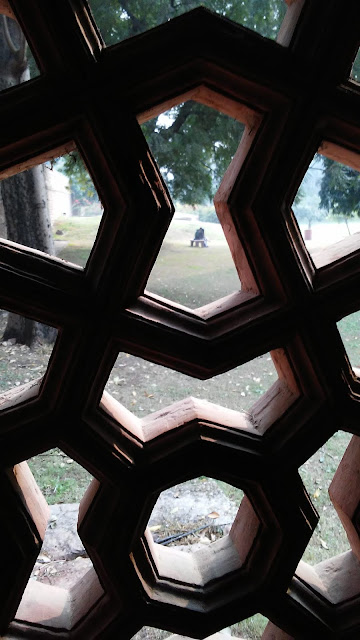 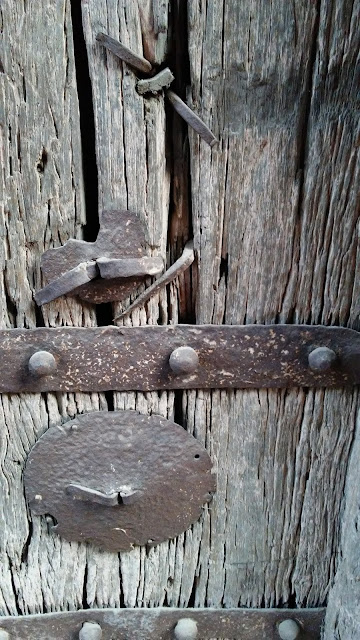 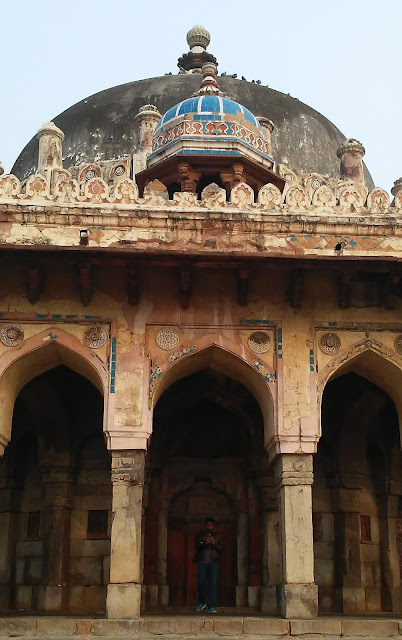 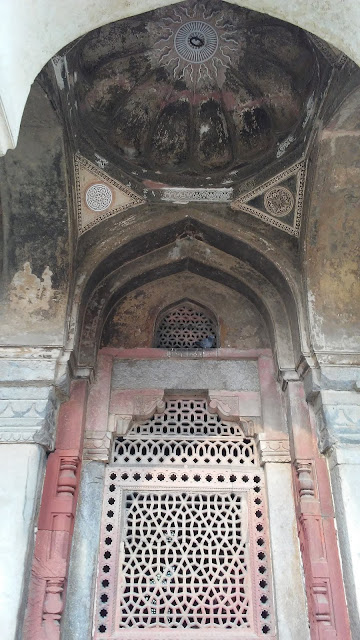 I did delight in seeing museums full of a wider section of artifacts from all over India. This is the selection at the Albert Hall Museum in Jaipur. 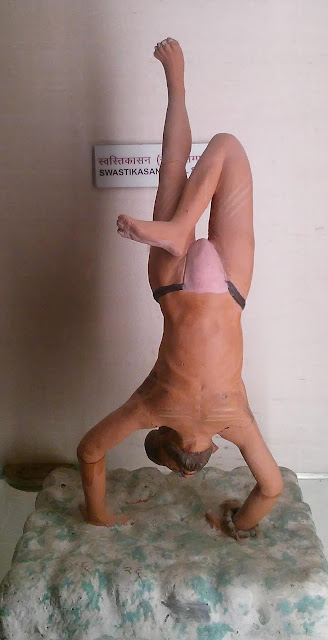 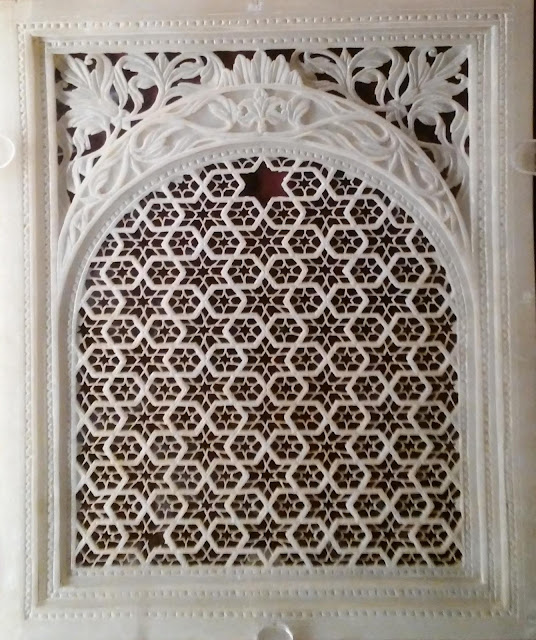 What we saw was some very old, trusted religious observances like the sacred cows in the streets taking priority over traffic and cleanliness and mosques which no longer seemed to be used by religious prayer but with places for rugs to face mecca and the necessity to remove shoes before visiting. This was juxtaposed with a cacophony of merchants’ signs in English, hoards of hawkers trying to get us to buy their goods, mothers using small children to beg for alms, and the most lavish of fabrics whirling around us in markets and on ladies of every caste.  Just like the cows, men were peeing but also washing in the streets, one man I noticed was even shaving using his cell phone as a mirror.

We mostly felt very safe but challenged by public toilets facilities that were universally disgusting. Our very privileged stay in 5 star hotels was soon considered a necessity as Darwin and I particularly could not manage the very spicy food and even those thought very mild by Indians, but gave us Delhi Belly and indigestion. We must have been seen to be very fussy to the locals, but we both suffered from bad colds probably brought on by the air quality with the even present exposure in airplanes and I ended up with a terrible rash soon after I arrived in the UK. We took precaution with Malaria and Typhoid and sprayed for non-existent bugs with Deet and are happily recovering, but I would suggest the trip to India is something you should do while younger in your life to have the stamina that is required.

You really want to develop a mindset that is accepting to this culture to fully enjoy it. Throw out the American standards and see how living with a cow as an equal might free you to enjoy life in a completely different way.


On our last two extra days in Delhi, the Poteets and I had an opportunity to visit some private contemporary galleries as well as the National Gallery of Modern Art. I was ready to be re-engaged in the present or at least near past. The installation about the Salt March of 1947 was one of the highlights. See the last of three parts of this report for more about India: Modern and Contemporary Art .