State of the Arts California, 2020 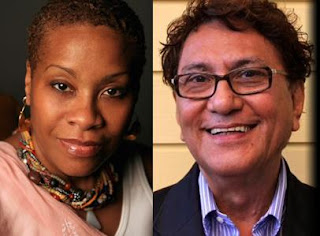 The California Arts Council (CAC), which is headquartered in Sacramento, holds its board meetings in different cities throughout the state. In December, it was Oceanside’s turn and a number of us attended for a variety of reasons.  I wanted to make sure that the CAC was aware that we are trying to bring back the San Diego County Arts Council*.  Others were recipients of grants like the Oceanside which got recognition as an official cultural district which comes with a two year stipend. They were there to demonstrate how they used the money and how appreciative they were of the award. Other organizations wanted a chance to be seen by this important state board.

Although I could not stay for the entire meeting I was very impressed with the chair of the CAC, Nahomeh Lindo. She served as an independent museum consultant for the Fine Arts Museums of San Francisco, the San Francisco Museum of Modern Art, and the Oakland Museum of California, specializing in African-American cultural history. Her work is as a photographer, printmaker, and painter. She transfers her photographs on to textiles. A native of Philadelphia, Lindo received her M.S. from Pennsylvania State University. She was appointed to the California Arts Council by Governor Jerry Brown in October of 2014 and reappointed in February 2017. From April 22, 2016 to January 25, 2018, Lindo served as Vice Chair. On January 25, 2018, she was elected 21st Chair of the Council. Her current term expires on January 1, 2021.

Lindo spoke about the wonderful Increase in public funding toward goals of shared ideals and identity. This funding has enabled the CAC to grow and broaden scope instead of just surviving. She seems especially interested in promoting National Health programs for the healing arts. Social and emotional learning (SEL) is the process through which children and adults understand and manage emotions, set and achieve positive goals, feel and show empathy for others, establish and maintain positive relationships, and make responsible decisions. It seems that grants that incorporate these sorts of goals will be favored because as she commented, “Every voice matters.”

The thrust here is for the arts to work with other government and non-profit agencies. In this regard and many others, the CAC is seen by other states to be an art council model. We are not just talking at the healing arts, but STEAM with the sciences, veterans, emerging leaders of color and native Americans. I was so impressed that every Indian nation in California was acknowledged and thanked at the beginning of this meeting.

My personal hope is that Larry Baza, a long time San Diego art activist and current vice chairman of the CAC will step smoothly into the chairman position at the beginning of 2021. At that time, our hopes are to have at least three county supervisors in favor of a SD County Arts Council.

* I am Patricia Frischer, founder of San Diego Visual Arts Network. I got my master’s degree in Art in the early 70s from CCAC in North CA. Art Education was in good shape at that time and the market for art was strong. I left America to work in the arts in London England for the next 30 years and returned 20 years ago.

San Diego County is larger than Delaware or Rhode Island. We have 18 incorporated cities. There are also 18 Indian reservations, 16 naval and military locations and a whopping 64 unincorporated areas. What I found when I returned was the wild west!

I asked at the MOCA for a guide to the arts and they laughed at me. Eventually I found a very rich population of arts and culture here but it took work….tremendous teamwork that resulted in the SDVAN directory and events calendar where we promote the 2500 visual arts resources of our site.

There are other strong county wide umbrella arts organizations like Synergy Arts Foundation that aids artist in needs, The Performing Arts Leagues, San Diego Regional Arts and Culture Coalition plus of course the city of SD  Commission for Arts and Culture, 5 or 6 other paid city arts administrators and some good volunteer city commissions. There is now a North County Arts Network and organizations forming in the south and east countries.

I, along with many of my colleagues, am an advocate for bringing back the SD County Arts Council as a state local partner for the CA Arts Council. At the most basic level we need some sort of Chamber of Commerce for the Arts and a way to promote the arts as an economic driver. We need someone to wake up every single day whose job it is to administer the Arts in San Diego….County Wide.