I think it is time to pay homage to Naimeh Tanha Woodard who has whole heartily supported local arts since I was first asked to train her in 2006. She was a health care executive who spend many hours in hospitals as part of her job so she had a very good idea of how patients and their families as well as health care providers​ ​could benefit from the arts. She did not want to become an art therapist, but instead wanted to make sure that the healing powers of art was available to all seekers. She had a website constructed and presented art that was created specifically to help those with health challenges.

She was able to start a healing arts program at Scripps and she became a board member of Synergy Arts Foundation which aids artists in need. Several years ago she became a Commissioner for the Arts in Encinitas about the same time that she married the love of her life Jonathan Woodard, businessman and talented musician. They live in a charming home with their dog and chickens, a recording studio for Jonathan and a new art studio for Naimeh. Naimeh's daughter is in training to be a doctor.

Naimeh is a terrific party giver and has become known for their annual carrot cakes competitions that have morphed into salsa competitions, and celebrations of all types. The last was for Jonathan's 60th birthday and was complete with a dance performance by Ballet Folklorica de San Dieguito and delicious Mexican cuisine. This group

​was formed and is supported by the Encinitas Friends of the Arts and started right after the first celebration of the Dia de los Muertos, the Day of the Death ​
which Naimeh helped bring to Encinitas.


A large part of her duties now as commission is to direct the Encinitas Friends of the Arts organization. This fledgling group has been tasked with gathering together volunteers and supporters and funds mainly to elevate cultural arts in Encinitas, to support the artists and arts organizations in Encinitas while raising funds for a city owned art center. . With Naimeh's extensive world knowledge, putting on a series of events exploring cultures from across the nations is a great fit. The first was Passport to Persia, followed by Passport to Cuba and now at the end of August, we are getting to enjoy  Passport to India. Her skill lies in putting together a great team, offering a large variety of enjoyable experiences and being sensitive to the customs of each area. Naimeh Tanha Woodard is a gift to our arts community. Go to her events and will discover new joys.


The third passport event in Encintias is Passport to India: Tradition to Transition produced by Encinitas Friends of the Arts on Fri. Aug 28 from 6 to 10 pm at Encinitas Community Center (1140 Oakcrest Park Drive, Encinitas, 92024) Tickets $20 to $50 More info: encinitasartsmail@gmail.com. The Passport to Persia and the Passport to Cuba would both exciting events and so don’t miss this one featuring Featuring
Singer: Rahis Khan,
DJ/Drummer: Vikas Srivastava,
Dancers: Kirti Srivastava ,UCSD Zor, Payal,
Visual Artists: Bhavna Mehta, Sushila Srivastava and Preet Srivastava 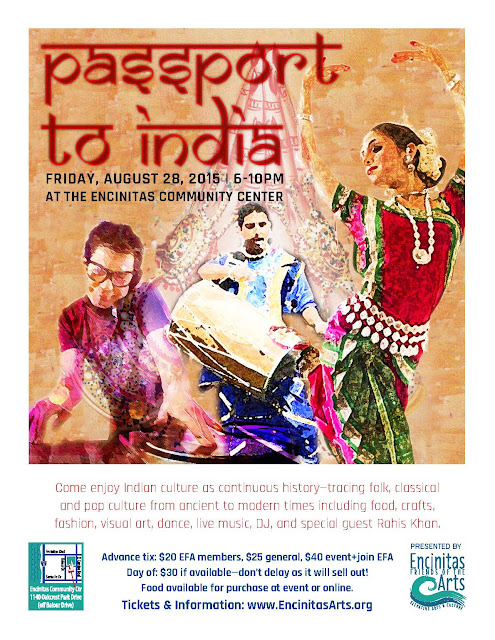